Welcome to the Dragon's Lair!

Enter at your own risk!

Why WDRC Blades are better!

WDRC BladeCP's are far from "out of the box". In fact they're far superior than the new BladeCP Pro that E-flite recently released.  WDRC has searched and found some of the best after-market replacement parts available for these Heli's. What couldn't be found was designed and fabricated. 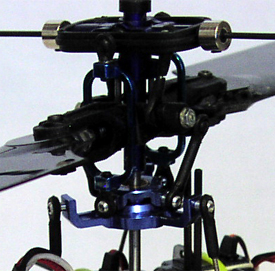 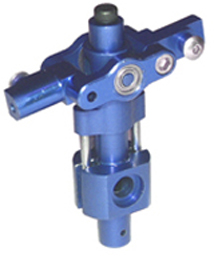 At the center of it all is the Rotor Head and Swashplate (Figure 1). The E-flite Aluminum Swashplate eliminates any flex or play found with the original nylon plate. Flight Tech Aluminum Rotor Heads (Figure 2) have also been installed which, like with the new Swashplate replaces nylon components, eliminates flexing and play and provides incredible stability and very smooth changes in blade pitch.  Also pictured in Figure 1 are two WDRC modifications; the aluminum Paddle Control Frame Pushrods and Modified Bell Mixer Blade Grips. The Pushrods don't flex under high loads and the Blade Grips can no longer be considered "fragile". 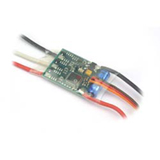 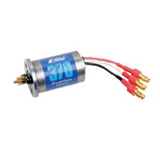 All three Blades use Castle Creation Phoenix-25 Electronic Speed Controls (ESC) (Figure 3). The ESC's are programmable via the transmitter or with the CastleLink PC interface for advanced functions. Get the cable!

The Blades are equipped with a Century Helicopters CN250 Auto-rotation main shaft gear and one-way bearing hub (Figure 4) and an E-sky Honey Bee CP2 main shaft. The one-way bearing in the hub works like a clutch and allows the main rotor to maintain blade speed even with a motor failure or glitch. This makes auto-rotation landings possible (landing with no rotor power), prevents the "YOYO" effect and gives smooth throttle response.

The final major component that the Blades have in common is the E-flite Park 370 4100Kv Inrunner brushless motor (Figure 5). The motor is much stronger and smoother than the stock and performance brushed motors available for the Heli. A 10-tooth pinion gear is required for proper blade speed with the configuration described. HPI RS4 pinions use setscrews to affix then to the motor shaft and were used rather than the press fit versions available from E-flite.

The similarities pretty much end there... The AeroBlade is built on a BCPP frame for weight reduction and uses HeliDirect Super Gear for the landing struts. The Super Gear also comes with tail and tail boom fins and boom supports; this adds to the looks, but provide no real gains for flight. The SuperBlade CP & the Infinity BladeCP are using the FlightTechUSA aluminum frame (Figure 6) (Please forgive the background clutter) with carbon fiber servo mounting plates (Figure 7 & 8). 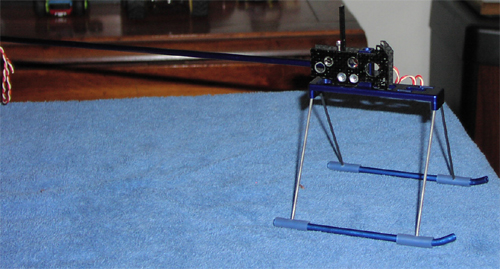 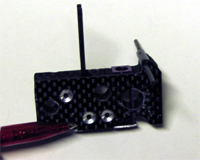 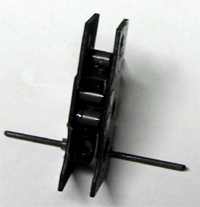 The carbon fiber mounts replace the provided mylar mounts and dramatically increase the rigidity of the mounting surface, preventing flex during control input. 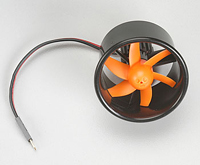 The SuperBlade, being the test craft for WDRC, has recently received some MicroHeli aluminum blade grips. The aluminum blade grips are much stronger and more resilient than the plastic grips, but they can be bent (as I have found out with a recent ballooning ordeal involving the electric wires on the poles near the house). Still a nice improvement! Additionally, the rubber O-rings in the head have been replaced by bearings from the stock E-flite blade grips and because of crash due to yet another tail rotor failure, I've decided to to upgrade to direct drive tails for both the SuperBlade and the AeroBlade. I will be using a GWS EDF40H Ducted Fan (Figure 9) and a MJPCarbon fan mount (Figure 10) for the SuperBlade. Some changes have been made to the MJP fan mount to allow the fan duct to be centered relative to the tail boom, (Figure 11) is a picture from the MJPCarbon site showing the standard installation so you can get the idea (Very, very nice heli!). The Aero Blade will use the GWS straight direct drive tail conversion. More pictures and details to come.

The SuperBlade and the AeroBlade also use "seperates". With the addition of a gyro, a Futaba GY401 for the SuperBlade and a E-flite G90 for the AeroBlade, seperate ESC's may be used to control the main and tail rotor motors and the 4 in 1 or 3 in 1 units can be eliminated. Gyro sensitivity can then be controlled through the gyro settings on the transmitter allowing for in flight adjustment, much greater functionality and a whole lot less frustration. The InfinityBlade still uses the E-flite 3 in 1 unit but with the BCPP transmitter, gyro adjustments can still be made.

The E-flite S-75 servos have just been replaced with Hitec HS-55's on the SuperBlade in an attempt to get some reasonable amount of time between servo repair and replacement. The S-75's seem to be fine for planes and are guarented for a year, but seem to be just too fragile for micro-helis. Minor impacts strip the gears and harder hits, just destroy them.

The TREX, much awaited, has been sitting quietly packed away for months with it's aluminum carrying case. Well wait NO MORE!!!! All that's left to do is replace the CF blades and paddles (don't want them crushed on a maiden flight) with the PRO325's, tune out the collective interaction from pitch and mount the training gear. BTW... always and I mean always put the training gear on for first flights or after significant changes.

The V2 SE comes with a lot of the upgrades in place... the new canopy, all carbon fiber frame, the new and improved aluminum head, the "fixed" swashplate, the 430XL motor (with... Ooo, Ooo, Ooo more power!), the Align 2100 Lipo battery and the new 35A ESC with the 6V BEC.  They don't call it the "Superior Edition" for nothing!!! The TREX is equipped with Hitec HS-65HB servos, a Futaba GY401 gyro and a Futaba 9650 tail servo, but..... Like anything else I own, I couldn't leave it alone either. So right out of the box, I've made some changes. Not many, mind you, but changes none the less.

I've elected to use a Castle Creations Phoenix-35 ESC for the programmable versatility. This sacrifices the 6V servo power of the stock ESC, but TREX's have been flying with 5V servo power for a long, long time! I've replaced the aluminum tail boom with a TREX XL carbon fiber boom and have installed the MicroHeli adjustable tail rotor control rod. I've added a LipoWatch battery monitor and remotely mounted 3 LED's behind the swashplate retainer.... at 10.5 volts the LED's come on, you've got about 4 minutes of flight time. The alternative is fly timed flights with battery cutoff without warning.... the peace of mind is well worth the additional few grams of weight this monitor adds to the bird!! I added the MicroHeli aluminum bottom frame, aluminum landing struts and a Dean's mini-antenna. See not much!

A special thanks goes out to a couple of the guys at HeliFreak.com. Bob "Finless" White for the incredibly detailed setup videos for the TREX and to Rick Lohr for inspiring and providing product info for the neatness and wiring (I hate messy and exposed wires). HeliFreak.com is, by far, the best heli forum on the net! If you can't figure it out, some one there can help. Thanks guys!! 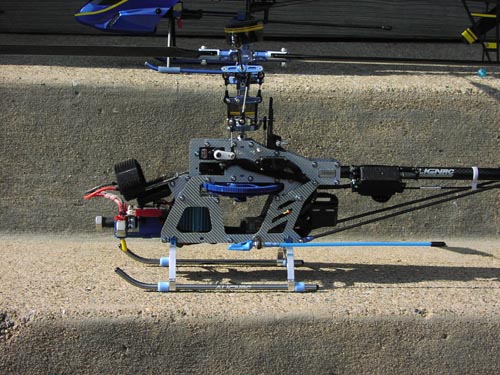 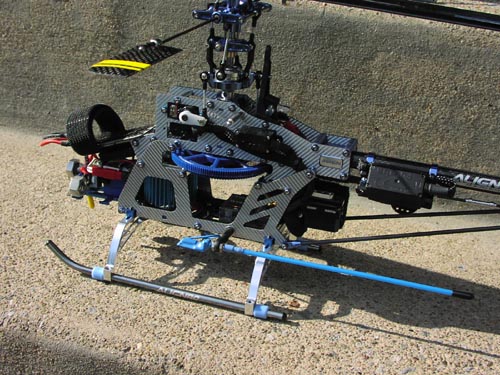 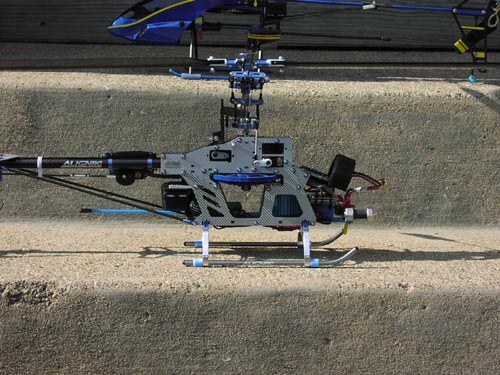 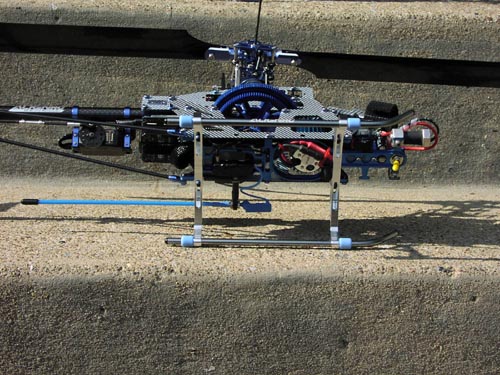 There was one notable problem with the TREX discovered after assembly. The V2 tends to be either tail or nose heavy when complete. I surmise that this is due to the tail rotor servo selection that's made. Mine ended up tail heavy and even with the carbon fiber tail boom the bird remained that way. I was able to compensate with the battery placement, but this resulted in the battery being so far forward that I was concerned that it would dismount during flight. To eliminate the need to reposition the battery so far forward I mounted 2-3/8" nuts on the front ears of the bottom frame. By changing the number of bolts or by threading them further in or out I can easily balance the heli for which ever battery I choose to use. Again, this adds a few grams of extra weight, but I would rather add a small amount of weight than put the battery in an awkward position. 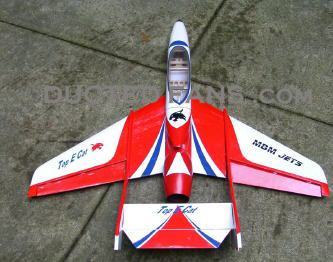 As with any ARF model, most modifications require regression for progression. The inner wing sections are stripped and the main gear retracts are installed. I'm still undecided on what wheels to use. The nose gear requires a bit more work. The main fuselage spreader has to be chopped to fit the strut and I'm torn between pull/pull and tiller steering. The rudders are optional, but I really want to use them. Normally, the rudder servos mount on the tail booms, but due to the added weight of the second fan and ESC, I want to mount smaller servos in the wings near the CG, use cables and link the rudders to get a pull/pull system in place. I've modified the forward compartment of the fuselage to accomidate the air can for the retracts and I'm in the process of re-enforcing the fuse with carbon fiber tube to help handle the additional battery weight. Hopefully the wing loading won't change too drastically with the mods. The outer wing sections will also end up fully sheeted. Currently part of the wing is only covered with monocote and I'm concerned about surface compression at speed; sheeting them will fix that! The horizontal stab and the elevator are a bit "light" too. I'll be beefing them up, but unfortunately like with the other modifications this requires stripping the original monocote and recovering (and lots more time)..... so look for another color scheme when it's all said and done!

I finally received the fan units, motors and ESC's! The HW505 fans are just the guts, so I have to mount them in the carbon fiber ducts, but the weight difference between the all plastic units and the CF units is amazing and worth the extra effort. 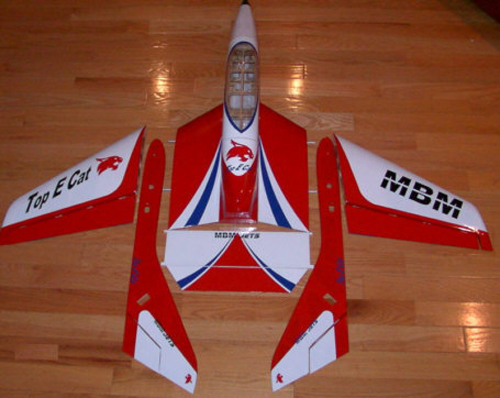 Originally concieved for use with a single 120mm EDF, like it's little brother this 55' wingspan version will be a twin EDF powered model. 2 90 mm Schubler fans will power the plane with 14-16 pounds of thrust! The mechanical retracts have already been upgraded to a fully pneumatic set along with 2-1/2"  wheels and a braking system. Additional setup details are still being contemplated!